You are here: Home / Dementia & Alzheimer’s Care / A Link Between Parkinson’s and Alzheimer’s

A Link Between Parkinson’s and Alzheimer’s

Researchers have long noted similarities between Parkinson’s disease and Alzheimer’s disease. The most notable of these similarities is that both of these diseases are degenerative neurological diseases. Over time, cognitive ability and neuron functioning decline. If other factors do not cause the person suffering from these diseases to pass away first, they both will progress to the point of death. There are treatments that exist to help manage symptoms and delay decline, but they only have a varying degree of success and there is not a cure for either. They are both life changing illnesses and both may require varying degrees of need in the person suffering from them. Both may require the help of a senior caregiver.

A new study out of the Washington University School of Medicine found that there is a connection between the two on a deeper level, too. There is a genetic variant called APOE4 that has been associated with dementia–including Alzheimer’s disease–for years. When someone with Parkinson’s also suffers from dementia, it can have a devastating impact on both the person and their family members. Dementia can also influence the type of care that is received and help determine whether or not more intensive care–like what would be found in a nursing home–is needed. 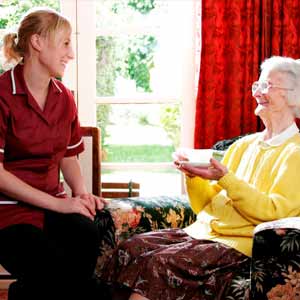 There might be a stronger link between Parkinson’s and dementia than what was originally thought.

Those with Parkinson’s disease tend to develop a form of dementia within 20 years of their Parkinson’s diagnosis. Research shows that this occurs in about 80 percent of those with Parkinson’s. The release of this genetic variant is common in those who suffer from both Parkinson’s and dementia, indicating that Parkinson’s may have something to do with it. Like many things in this field, this is something that will need to be investigated more thoroughly. However, the uncovering of this link may prove to be a step forward in the fight for finding a better treatment for both diseases. It’s a small step, but it still might be a beneficial one. At the very least, it gives doctors a better idea of what happens in the brain over the long term when someone has Parkinson’s disease.

The good news here is that if the cause of dementia in Parkinson’s can be determined, it is also more likely to be treated with a higher degree of efficacy. If APOE4 can be targeted in therapeutic treatment, then there’s a better chance now than ever that the long term risk of dementia can be reduced. Only time will be able to determine if this is possible or not.

When a loved one has Parkinson’s, Alzheimer’s, or any other chronic disease or disability, senior care can be a blessing. Most people are not equipped with the skills or knowledge to effectively help someone with these health issues. A trained caregiver can be a good way to make sure that the people that you care about have all of the help that they need. This can take place in a nursing home or in the home through the assistance of an in-home caregiver. It all depends on the unique needs of the person receiving help.