You are here: Home / Dementia & Alzheimer’s Care / Anesthetic Found to Be Linked to Alzheimer’s

Anesthetic Found to Be Linked to Alzheimer’s

For a long time, researchers have pointed to a number of different environmental factors that play a role in causing or exacerbating Alzheimer’s disease and other forms of dementia. Although some strong pieces of evidence exist, it’s hard to know for certain how some people will be impacted, much like how certain carcinogens do not universally cause cancer. This has led to a lot of skepticism.

However, research is advancing in this area, shedding new light on the cause of this type of dementia. A study from Massachusetts General Hospital found that the usage of a certain inhaled painkiller might actually help Alzheimer’s disease to progress more quickly through the brain. The anesthetic, called sevoflurane, is inhaled and often used for outpatient surgery. It is FDA approved for this purpose, but has previously been suspected of being linked with Alzheimer’s disease. This new study seems to confirm that it helps to exacerbate the severity and growth of Alzheimer’s in the brain. 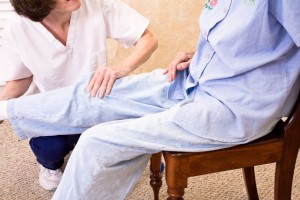 An anesthetic called sevoflurane may elevate the risk of Alzheimer’s.

The reasons why this happens are a bit complex. Alzheimer’s is related to inflammation and it has been known for some time that the inflammatory molecule interleukin-6 is increased when Alzheimer’s is present. To see just how this happens, researchers used the anesthetic in mice and found that this elevated tau levels in the mice’s brains. This then led to interleukin-6 increases, and the development of cognitive decline similar to what is seen with Alzheimer’s disease.

Interestingly, not all anesthetics produced this result. Another inhaled medication called desflurane did not produce any of the symptoms of Alzheimer’s in the tests that were run. The research team found that these medications impacted tau production–and thus inflammation levels–in different ways.

Additionally, this might be why seniors that undergo surgery can have such adverse reactions when it comes to memory. Sometimes, this is a short term thing, but not always. There’s more research needed here. It is the hope of the researchers that this study will serve as a jumping off point for future projects so that anesthetic medication and its link to dementia can be better understood moving forward.

Dementia of any sort can be devastating for a family to deal with. It takes a toll on the person suffering from it, and it takes a toll on the people that love them, too. It’s hard to see someone that you love lose their memories and begin to decline physically. Alzheimer’s doesn’t have a cure at this point, although there are things that can be done to help slow the spread of the disease.

Someone suffering from dementia has needs that they might not have had beforehand. If you’re having difficulty keeping up with the care of an older loved one with dementia–or any other issues–please reach out to a professional for help. Having a professional service on your side can help your mom or dad get the help that they need and live safer. Oftentimes, in-home care can be the right answer. This will allow them to continue to live in their own home and stay with family.