You are here: Home / Site Info / Parkinson’s and Depression

A question recently asked by researchers is: can depression bring on Parkinson’s Disease? It’s a good question, especially considering the fact that the likelihood of both go up as we age. And while it’s true that some people are more predisposed to both or one of the two because of their genetic build, there is a correlation between the two.

The study looked at over 20 years of data, and concluded that there is a direct connection between the two. The people that suffered from depression were more likely to have Parkinson’s when they became older. One interesting finding in this study was that siblings were not affected in the same manner. If the diseases were independent of each other, but caused by similar factors, there would be more siblings developing these issues. But that wasn’t the case. Siblings have closer genetic makeups, and similar environmental factors in early life, but that didn’t seem to have any sort of influence on the data. In the end, they found that 1.1 percent of people with depression later developed Parkinson’s, but only 0.4 percent of people without it did the same. The logical conclusion from this was that depression can be a precursor of Parkinson’s in many cases.

Parkinson’s disease is a serious issue and can have a big impact upon the quality of life in later years. If you have a loved one that is suffering from this disease, there are things that you can do to help them. Finding them appropriate senior care is a good start. Depending upon the severity of their illness, different types of care will be more appropriate than others. For mild cases that do not need a lot of extra medical attention, in-home care is best because it keeps your mom or dad in their home, is minimally intrusive because of the fact that no relocation is needed, and it is one of the cheapest types of high quality care that there currently is. Other, more severe cases, might need more intensive measures, such as a nursing home stay. It all depends upon how negatively impacted your parent is. 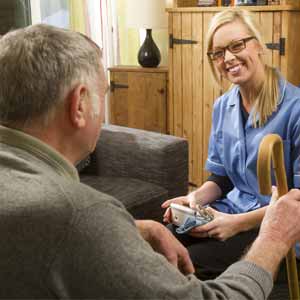 Depression can often be a precursor to Parkinson’s disease. The rate of those that develop Parkinson’s is higher in this population.

Finding the right treatment for Parkinson’s is tough, but the ongoing care that your loved one receives can lessen the blow. It makes all other aspects of life a little bit easier, helps them to be a little bit happier, and keeps them safer when they are not undergoing medical attention. It also provides a framework of emotional support that can potentially alleviate depression, if it is present. Many elderly folk develop depression simply because they’ve been isolated for so long, and a great caregiver can help to avoid this.

If your parent has depression, you need to help them find the right treatment sooner rather than later. Depression is usually treatable, especially when detected early on. Things like antidepressants, counseling, and exercise all have been proven to help depression. Whether these things can help prevent Parkinson’s later on is not yet known, but the worst case scenario with these things is that their depression is alleviated a little bit. That’s still a very good thing for your family!