You are here: Home / senior care / Reducing the Damage of a Heart Attack

Reducing the Damage of a Heart Attack

According to research out of the University of Geneva, much of the damage that occurs to the body after a heart attack takes place is because of necrosis in blood vessels. This dying off of tissue is set off by the presence of certain lipids that are produced in response to a lack of oxygen. Although a heart attack is a devastating health issue, the damage that occurs because of the subsequent necrosis can make it even worse. Scientists were able to find that by blocking the body’s production of this lipid in the wake of a heart attack tissue damage could be prevented by as much as 30 percent.

Researchers out of Switzerland used a mouse model to see whether health could be improved by blocking the production of this lipid after a heart attack was induced. Because of this, the tissue damage that occurred within the mice that were examined was much less than mice that had an uninhibited heart attack.

They published their findings in Nature Metabolism, along with recommended changes to help ensure that their findings could be used to benefit people in the future.

Their research started out in an unorthodox manner. They started by observing worms, creatures that don’t need oxygen in the same way that mammals do. Although they require it for survival, some worms can go days without oxygen and suffer no harm. This got researchers wondering why mammals are impacted by a lack of oxygen. What is the process that occurs in the body, and how is it different? They introduced human mutations into the worms and found that they could not go for extended periods of time without oxygen like the traditional worm could. With this starting point, they were able to find that when an arterial blockage occurs, lipids quickly accumulate and began to trigger further damage beyond what the heart attack itself caused. Blocking production of the lipid prevented that damage. 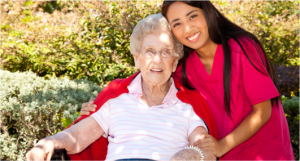 New research indicates that the damage that occurs after a heart attack might be able to be prevented.

Heart disease is one of the world’s leading causes of death. Each year, 10 million people die from a heart attack. 6 million others die from stroke. It’s no wonder that heart disease is such a pressing problem in the United States, especially for seniors. However, this current research is pointing toward the fact that the recovery process might become a little easier for many. Although more research is definitely needed in this area, the University of Geneva has helped move things forward a good deal.

That doesn’t necessarily help the seniors in our lives that are struggling with heart disease right now. If you have a loved one that is suffering from heart disease or is recovering from a stroke or a heart attack, you need to know that there is help out there for you. We can help you to get started. Our caregivers are professionally trained to help those with heart conditions get the rest that they need. We can also help with transportation and with tasks around the house. Give us a call to find out how we can help your family.