Seniors are often the target of financial abuse because of issues like dementia, but that doesn’t mean that you or your family need to be victimized by this. There are several different scams and frauds out there that are specifically designed to target seniors. While it would be impossible to detail all of them, I think it’s important that some of the most widely used methods should be exposed here.

The Sweetheart Scam: This occurs when one person promises love and affection to a senior, but before they can move in with them or get married, they just need to borrow a little bit of money to pay off a small debt. This scam has several variations, but the end result is that trust is betrayed for some sort of material gain. Oftentimes, the target never realizes that they have been scammed until they’re heart is broken and they have lost a lot of money. Love can and does blossom at any age, but the elderly can fall victim to this because they often do not see through someone’s malicious intentions.

Government Impersonation: This scam usually comes with someone pretending to be an IRS agent, a Medicare official, or some other government representative. The target is said to have fallen behind in payments or missed some sort of due date. The scammer might act really compassionate and helpful with helping the target get “up to date” or they might be pushy and threatening. Either way, the goal is to part someone with their money. Always be sure to double check with an official from a phone number posted on a government website or at a government office before you or a loved one begin paying on a previously unknown obligation. 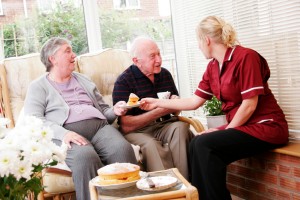 Financial scams can be devastating for the elderly.

Lottery Fraud: We’ve all heard the one about the Nigerian prince who has passed away and named someone as their sole heir. That’s a variation of the lottery fraud, where someone has just come onto a large amount of money and they just need to pay a fee to have it transferred over to them. This is a silly fraud, but it stays relevant because people keep falling for it. The promise of a huge amount of money is an alluring one, but the general rule of thumb is that if it’s too good to be true, it almost always is.

Betrayal: This is one of the hardest scams to prevent because it is almost always completely unexpected. Luckily, this doesn’t happen nearly as often as you might think. There was a recent story in the news about a man who asked a friend to help him take care of his bills. Over the course of time, this man had more than $19,000 stolen from him by the so-called “friend.” These things can happen, and the best way to avoid them is to simply try to have a more realistic view of the world. Seemingly good people can do bad things. One way to avoid this is to leave things like paying bills to a group of people rather than just one individual. Creating a legal structure such as a senior care advocacy committee can be helpful, too.