An interesting study that concluded recently found that individuals that were not quite in their senior years (here defined as ages 50-64) who worked or volunteered on a consistent basis were far less likely to develop physical disabilities. The information came from Health and Retirement Survey data that was collected between 1998 and 2012. Over 13,000 individuals were assessed, and individuals were followed up with by researchers every two years in order to help the study to stay as informed as possible. Those behind the study looked at functional limitations, and they assessed tasks like being able to walk around the block, going up a flight of stairs, picking things up off the ground, and other similar tasks. The goal was to look at the individual’s background and see if and how any disability might have developed.

Many individuals at this age have chronic illnesses that they are battling with, such as diabetes, obesity, or perhaps some sort of cardiovascular illness. These were the individuals that were found to benefit to the highest degree from staying active. While these illnesses are not necessarily easy to treat, the active lifestyles that people in the examined age group were found to be less susceptible to the development of disability in their senior years. 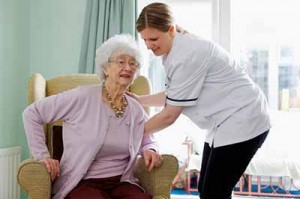 Active individuals are more likely to have higher levels of senior health later on.

This information is especially helpful because research shows that when people develop disability, mortality rates go up. Not only this, those with disabilities are in a greater need of senior care. Senior care, even the least intrusive of care types like what you would find with in-home care, is a life changing need, and not one that people look forward to receiving. Having programs in place in some way that encourage those that are able to to continue to be active, whether it be in a professional setting or not, is an important part of maintaining health into the future. Being physically and mentally active, as well as being around people, are important parts of staying on top of your health. It also helps to reduce the need for expensive health care later on in life thanks to better overall levels of senior health. It’s a pretty simple thing, but not something that everyone who can takes advantage of.

One of the most important takeaways from this study is that mental activity has more than just mental benefits. Other studies have shown that patients suffering from Alzheimer’s disease see a slower progression of their illness and stay healthier at a cognitive level for longer when they keep their minds busy than those that do not stay active. This doesn’t have to be as complicated as working a part time job or volunteering once in a while. Alzheimer’s patients can benefit from things as simple as doing puzzles, playing games, and even having conversations. This mental stimulation helps those with terminal dementia in a similar way that the activity of working helps prevent disability. Wherever your family members fall on the spectrum of care needs or health, there are things that you can do to help them stay active and as healthy as possible.